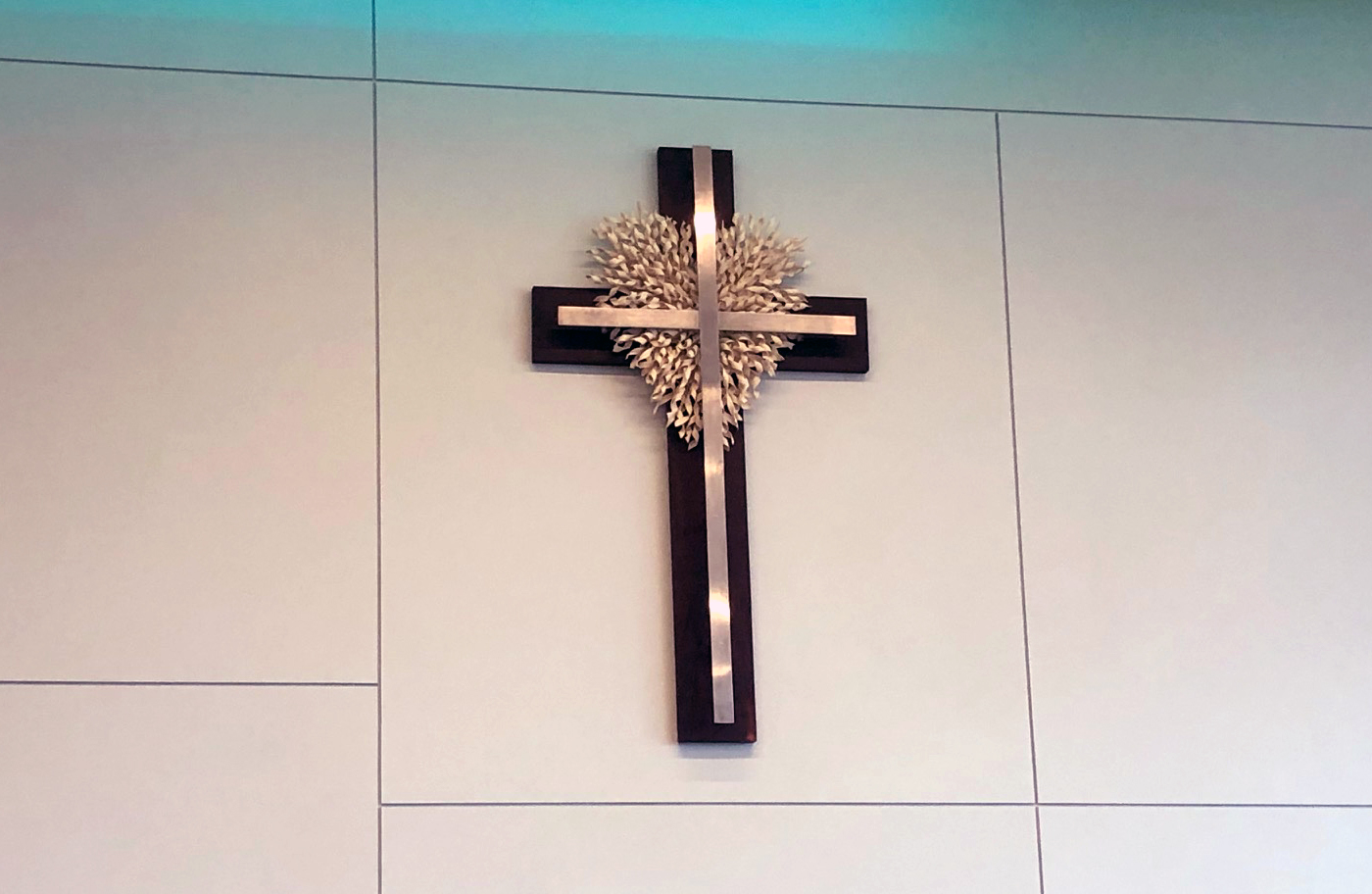 At the beginning of the 2018-19 school year, Bellarmine commissioned Sophia Lewis B'13 to create a cross sculpture for the Connelly Campus Center dedicated to St. Joan of Arc. Sophia’s cross was installed last spring, and now hangs prominently for all to see in the Campus Center.

Sophia's inspiration for the cross had much to do with the religious experiences she had as a student at Bellarmine, in particular in the classroom of the late Mr. Tim Milnes.

"[Mr. Milnes's] outlook on life and appreciation for other cultures and religions broadened my own views on religion and religious art," Sophia said.

The cross she created for the Campus Center is made up of three elements - wood, clay and metal. The wood of the cross symbolizes Jesus Christ, who was a son of a carpenter and died on a wooden cross. She chose African Padauk wood because of its beautiful red color, which also symbolizes the blood that Jesus shed for our sins.

The porcelain clay spirals are in the formation of a heart, which symbolizes the Sacred Heart of Jesus. Sophia noted that the Sacred Heart is often portrayed as a heart-pierced with a cross and flames rising from the top, representing the transformative power and divine love that Jesus has for mankind.

"I have always loved the meaning behind the Sacred Heart, but found its depictions a little gruesome," Sophia said. "So, I instead chose to turn my heart into an explosion of spirals that will light up, showing that his love for us is always burning and powerful."

"Joan of Arc has always been a role model for me and I wanted to incorporate her into the sculpture as well," Sophia said. "The metal represents how she took up her sword and led others into following God, even at her young age."

She added that representing her in the cross will serve as a reminder to the Bellarmine community that you are never too young to do what is right.

Sophia's passion for the arts is part of her DNA. Raised in a household full of artists and musicians, it was inevitable that the arts would become a part of her identity. She sees the arts as powerful and necessary for the future.

“The arts have a way of changing the way people view the world," Sophia said. "It helps them see what is beautiful, and the parts that are not so pretty and give them the realization they want to change things for the better."

Sophia credits a large part of her formation within the arts to Bellarmine. During her time here, she was heavily involved in the performing arts, choir, and orchestra.

"Bellarmine's Music Department opened the doors for so many adventures," Sophia remembered. "But Bellarmine was not just about music for me, it was an opportunity to grow and be challenged."

She adds, "Bellarmine taught me to stand up for what I believe in, to work hard even when it seems hopeless, and that nothing will ever be handed to you in life. Bellarmine is what got me into college and made me who I am today."

Today, Sophia's goals are to complete a Master's in Education with endorsements in Music and Art, with the hope of one day teaching in those subjects.

“I have always wanted to teach and cannot wait to help others find their passion for the arts," Sophia said.

She also will continue to create art and is planning to set-up an online store where people will have the opportunity to purchase her creations. Primarily though, she prefers working on commissioned pieces.

"I like listening to people who have an idea and creating a beautiful piece that reflects that idea, which they will love forever.” She said.

Sophia does have some advice for current Bellarmine students interested in the arts.

"Keep at it! Some people will like your stuff, others will not, but as long as you are happy creating, their opinion shouldn't matter. Life is too short to worry about the opinions of others. Making art takes practice and patience, but if you work hard at it the payout is invaluable. Explore, learn new things, just create!"

After Bellarmine, Sophia graduated from Pacific Lutheran University {PLU) in 2017 with a B.A. in Studio Arts. She currently works at PLU as the Campus Restaurant Supervisor-Retail Focus and in her free time she loves to create art and explore the Pacific Northwest.